This is the blog of Susan Dworkin, author, playwright, environmental advocate, feminist, grandmother, songwriter and audiobook producer, all of whose attempts at retirement have failed.

The Miraculous Ascent of THE NAZI OFFICER’S WIFE 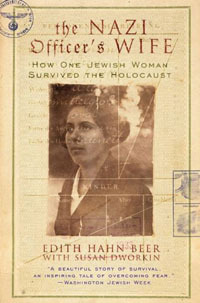 It has been almost 15 years since THE NAZI OFFICER’S WIFE was first published. Six weeks ago, in an amazing leap forward, it took up residence on The New York Times E-Book and the Combined Print & E-Book Nonfiction Best Sellers lists.

The memoir has ranked Number 1 in multiple categories on Amazon, including History of Religion, History of Judaism, Women and the Holocaust. And it has spent 2 full months on Amazon’s list of the top 100 Best Sellers in Kindle eBooks. As of May 2, it’s Number 75 -- (GAME OF THRONES is Number 74)!

How come this memoir of escape from the Holocaust, which I wrote with the woman who lived it, the late Edith Hahn Beer, suddenly became a best seller? A miracle of book marketing, say the experts. Maybe. But in my heart of hearts, I know that it is also because of our fascination, in these dangerous times, with survival. More and more, we ask ourselves what it will take to live through calamity, natural or man-made.

Edith was a well-educated Jewish woman from Vienna, soon to earn her law degree, when the Nazis came to power. In a remarkably short time, she entered poverty and bondage, conscripted as a slave laborer to work in some farmer’s fields. “Everybody got something,” she used to say of those ordinary citizens who agreed to be led by the new regime. An apartment, a piano, a business, a better job, a bill that would never have to be paid, all suddenly abandoned by former friends and neighbors who had “mysteriously” disappeared.

Edith lived through the war as a “U-Boat”, a Jew masquerading as an Aryan and hiding in plain sight. She pretended to be an uneducated country girl. Worked as a nurse’s aide, cleaning bed pans. Kept her head down and her voice timid and soft. After the war, if something frightened her – say, an argument or a sudden loud sound – that “little mouse voice” instantly would come back.

She never credited herself with her escape. She did acknowledge that she was always terrified, always. That the dumbness of luck kept her from being murdered as her mother and her friends were murdered. That five people helped to save her. A former student who gave Edith her papers and her identity and who is now commemorated among the Righteous Gentiles at Yad V’Shem in Israel. An acquaintance who fed her when she was starving. A factory worker who taught her how to make the quota. A German officer, soon to be dead in North Africa, who taught her how to play the ration system. A young Nazi Party member named Werner who fell in love with Edith and married her and hid her identity, even though discovery would have cost them both their lives.

When we were working on the book, drinking tea at her apartment in Netanya, Israel, Edith commented: “I think sometimes, if every Jew had five people who helped them, there might have been no Holocaust.”

So there’s the real miracle: five people in a nation insane with hate who reached out to help. They were the keys to Edith’s continued existence. To my mind, they are the ones who put THE NAZI OFFICER’S WIFE on the best sellers lists because they are the ones who showed us a way to survive with our humanity intact. Certainly useful information.
Read More